The other night, one of the lamps was flickering. It made some noise, and it refused to go out or stay on. I started thinking about that on my drive in to work and it occurred to me that the bulb was similar to what my husband must be experiencing each day. Most days are good, but some days he just can’t seem to get his “bulb” to hold the light steady.

He has always been forgetful. He has never been able to find his wallet, keys, or belt. He loves junk drawers and would create one in every room of the house if I allowed it. He loves things neat and tidy, but he can be a bit of a slob. His truck often contains piles of clothes, tools, empty bottles of Pepsi, and junk mail. However the house is meticulous, and his closet has no order. I have tools in my linen closet, and oddball tubs in my basement. He keeps floors mopped and vacuumed, dishes done, beds made, and household items picked up, but I often can’t figure out where he puts things. He is a “tucker” and he often makes up places to put things. He’s always been this way, it just seems like it is magnified. Is this the dementia or would this have happened anyway?

He doesn’t remember directions and can’t hold on to recent conversations and activities. He has always prided himself on the ability to remember numbers and names. He could reel off long part numbers without looking them up and know people in town by their license plates. I was floored by the cognitive exams in the office and the lengthy neurological exams. I had no clue that he struggled so much. 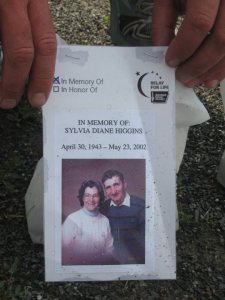 He presents himself as if all is as it’s always been, with just a little
flutter. In 2002, he lost his mother and in 2010 he lost his father, both to cancer. He rolled the four-wheeler, broke a lot of bones, and started

taking antidepressants. He started to come back to us, but then he hit the wall. I blamed it on being tired. He worked in a stressful environment and we attributed his irritability to the job. He wasn’t always honest. He visited “invisible friends” that I never met, and made poor choices. In fact, about six years ago, I wasn’t sure that our marriage was going to make it. Although he went to counseling, he was miserable. He was convinced that co-workers were picking on him and he cried nearly every single night. Was the bulb flickering then?

One time he called me and didn’t know where he was. I remember hearing a NOVA special in the background. The same night, he couldn’t find his way home. He was making mistakes at work, he couldn’t remember customers he’d seen the day before. He made errors on paperwork he’d done a million times before. He slept a lot and wanted to stay home. When did this thing begin? Should I have noticed earlier? If I had, would things be different today?

I can’t help but think about the significant moments in our children’s lives during the past six years. Was it God’s gift that we did not have a clue? Would it have taken away from their special moments? 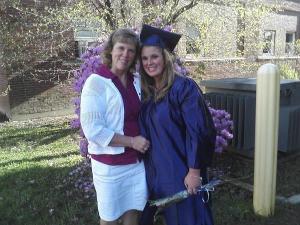 I don’t think it is very noticeable unless we are in crowded or unfamiliar places. Sometimes he does silly things. One day he walked around the island in the center of our house, asking me the same question over and over. After our Anniversary Weekend, I shared at church that we had just celebrated our 27th year of marriage and he told them that we “had not and that if we had, he would have remembered it”. Sometimes he shivers, shakes, and stares when we are at church or the doctor’s office. One Communion Sunday, he shook so hard that he spilled the juice on the floor. Some nights he barely sleeps and wanders the house, but more often, he sleeps as much as 14 hours a day. He has a headache that won’t quit, hears voices that sound like a crowded room, and is terrified to drive further than the family farm.

Most days he acts like my same old husband. In the summer, he spends his days puttering outside in the garden and mowing the lawns. He loves to clean and organize his garage, and he spends cold winter days cleaning, organizing, and pretending he’s a millionaire on the garden sites on the computer. He still laughs and jokes, and loves to watch movies. He still yells at the cat and loves to watch the birds out the window. He Skype’s the children nearly weekly and enjoys a good knock knock

joke and making crazy faces with the grandchildren. The only difference is that he can’t remember how to tie his own shoes, and he rarely leaves the house or sees people unless they come to visit. Instead he talks daily to others affected by Alzheimer’s and Dementia on a computer support group.

They say that he is progressing quickly, although his neurological exam didn’t show much change over a 6 month period. I wonder if people notice a difference. I sometimes do…in his eyes. Sometimes when he is telling me something, he stops mid-sentence and stares. Sometimes he can’t figure out the word he needs so he just gives up. At times, I can’t “read him” and it is his 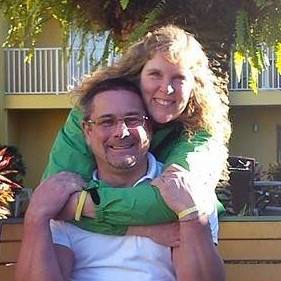 eyes that give him away. He might look sad, but when I ask what is wrong, he seems confused and wonders why I asked. That’s when I see the flicker. That’s when I get scared. My soul mate, the one I am supposed to age with, is changing ever so slightly before my eyes and denial isn’t going to change the outcome. I listen to support group members, but in my mind, I keep saying that this is not supposed to be happening to us and I dream about doctors calling to say how sorry they are that they made the wrong diagnosis. I feel like I am in a dream, a really bad dream, and I am terrified of what the future is going to be for me now. I worry about what to do with the house, how I will make ends meet, since I am not entitled to any benefits after he is gone. I mourn the inevitable loss of his family after he passes. I can’t plan for the future and my dreams are dashed. In the meantime, I am going through the motions, checking tasks off the list, painting on the face in order to be strong for my family and not be a “Debbie Downer” with friends and coworkers. God and I talk often, and though he knows how I feel, he is making me take this journey anyway.

Like my husband, I am fine most of the time. The difference is that his flickering is his mind short circuiting, and my flickering is my heart breaking.